Normally, I'd post a change log for today's date, but nothing that I'm working on is actually done yet.

Right now, I'm working on the boss fight design for the Polygon of Horror boss fight.
This has required learning about the realities of dealing with paths in GMS2. Maybe I'll go into that another time. Now that I've got it down, there will be lots of bullet hells :-) And...more than likely, a much needed design on the "Mr. Cortmander" boss fight. 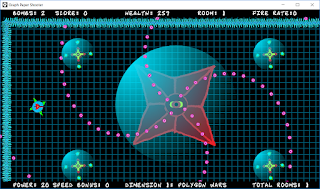 Since I want the shield generators (in the corners) to also spawn enemies, I had to generalize the enemy spawn code  and turn it into a function. Previously, it was only run by the enemy spawner, so it's not a case of "had the code in a bunch of places", but rather a case of "I totally do not want this in two places". There's some complicated crap going on in there. So, now things other than "spawners" can spawn enemies.

Also, while I was at it, I decided that I wanted the player ship to bounce off the shields around the generators and the boss. So I spent about an hour working out a generalized solution to bouncing the ship off of stuff. Such as the walls. Right now, the ship checks to see if the ship has a hit a "left wall", and if so, moves to the right. If it hits the "right wall", it moves left.

The new code figures out where to bounce the ship to based on the difference in the location between the center of the ship and the center of the object it just hit. This gives me the information I need to figure out which direction the ship needs to bounce. On on the one hand it means I have to put more (hidden) "wall objects" on the borders of the rooms. On the other hand, it means that they can all just be the same kind of object and only one collision check, which is now generalized, needs to be run.

Have also been working on new art for powerups, new monsters, and the elements of the boss fight shown above. Showing off the new monsters will have to wait until I put together some web friendly image strips.

And finally, the inter-dimensional interstitial has been redesigned. Now it just randomly splats all the critters you've killed on that level all over the screen. Kind of like how the "Next Dimension" screen does it - but, to be clear - one picture for every single enemy killed.